Laverne Harris
Buckley, Washington, United States
Laverne Harris' first word was "horse." She began riding lessons in 1954, and she purchased her first horse six years later. In 1989, Laverne began teaching young people horsepersonship on a volunteer basis. Over the years, more than 400 young people have been a part of the farm. Many of them have grown up to join the horse world. Some of these youngsters were categorized as at-risk students. They benefited from the horses, making the farm their second home. Laverne and her husband, Steve, noticed that the horses and ponies also enjoyed the company of the youngsters. Laverne has studied to consolidate her skills. In September of 2000 she became a TTEAM (Tellington-Jones Equine Awareness Method) practitioner. She has continued to update her training. Encouraged by the Harris' association with the Society of Friends (Quakers), Friendly Horse Acres became incorporated as a non-profit organization in 2004.

Anytime we get snow in our area of Washington State, it disappears within days. I have considered buying snow runners for my open horse carriages, but I have always decided the expense is not worth the short pleasure of whizzing around on the snow and ice. I have always thought it would be fun, though.

I may be the horsewoman in my family, but my non-horsey parents were the ones who had the pleasure of experiencing a sleigh. They assured me it was fun, although it could be a little hazardous. They told me that when spring arrives, the runners should be replaced with wheels.

When my parents were first married in the 1940s, my father took a teaching job in the interior of British Columbia in a small community called Trinity Valley. The area was isolated, with few roads for an automobile, and cars were limited to use for trips to the “big city”- Lumby. The school was a one room structure, and my father taught all elementary and high school grades. He and my mother lived in a cabin about a mile from the school, along a path through the woods. Everyone either walked to school, or rode a horse or pony. There was a shelter area outside the school to keep the animals. My parents had a cat and a dog, but no horses. Dad walked to school, unless one of his students picked him up in a cart or a sleigh.

Spring had arrived to the valley, and the ground, although still white with snow, had begun to sport a patchwork quilt of brown, with sprigs of green poking through. My father had finished a day of teaching, and he was offered a ride home in a sleigh. The student was an older lad, in the upper grades. Not only my father, but my mother and a friend would be passengers. My mother and her friend had been visiting another woman. They would be picked up and then my mother’s friend would be driven home before Mum and Dad stepped off at their cabin.

The four of them were bumping along at a rapid pace. Dad and his student sat in the front. They were quiet. Dad was tired, and the young man was a taciturn sort. Mum and her friend maintained a lively conversation. They giggled, and enjoyed the pace, snuggling in a blanket. They perched on a bench on the back of the sleigh. The bench was less of a true seat and more of a temporary platform for the convenience of an occasional passenger.

The path was inconsistent. The sleigh dragged and dipped as it hit the patches where snow and ice had melted. The horse kept an uneven pace as a result.

My father and his student suddenly realized that the women were quiet. They turned around. No passengers. No bench.

The driver halted his horse, and looked for a place to turn around.

Off in the distance they could see the women, or rather; they could see part of them sticking up in a snow bank. Their legs waved in the air, like reeds in a wind. As the men approached, they could hear gales of hysterical laughter.

My father made solicitous noises, trying to keep his own laughter under control as he helped my mother and her friend to their feet. The young man replaced the bench, working silently to put his sleigh in order.

As everyone settled in place for the ride home, the young man finally commented, “I guess it is too late in the season for the sleigh.”

The moral of this story is: Don’t leave the runners on too long.

I haven’t put them on at all. Could be fun, though. 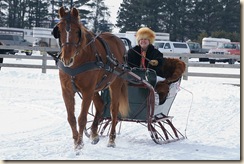 Posted by Laverne Harris at 2:05 PM