Laverne Harris
Buckley, Washington, United States
Laverne Harris' first word was "horse." She began riding lessons in 1954, and she purchased her first horse six years later. In 1989, Laverne began teaching young people horsepersonship on a volunteer basis. Over the years, more than 400 young people have been a part of the farm. Many of them have grown up to join the horse world. Some of these youngsters were categorized as at-risk students. They benefited from the horses, making the farm their second home. Laverne and her husband, Steve, noticed that the horses and ponies also enjoyed the company of the youngsters. Laverne has studied to consolidate her skills. In September of 2000 she became a TTEAM (Tellington-Jones Equine Awareness Method) practitioner. She has continued to update her training. Encouraged by the Harris' association with the Society of Friends (Quakers), Friendly Horse Acres became incorporated as a non-profit organization in 2004. 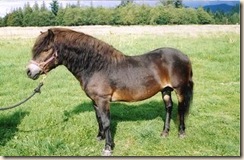 The roadway concrete shook, rumbled and threatened to crack. Devon was coming. The engine roared like a freight train chugging around a mountain bend, rather than a horse hauling company bringing in one Exmoor Pony stallion. The gigantic truck looked like a cruise ship as it navigated the suburban streets to our farm, a lonely hold-out of pastureland, in the small city of Buckley. Neighbors pushed aside curtains to see what invaded their streets. Our generous circular driveway hardly accommodated the length of the vehicle, as it halted with the exhale of brakes.

The driver clambered down, and grinned at us, “Glad to find you. He sure is a nice little guy.” The friendly man led us around to the back of the trailer, and he guided my husband, Steve, and I up the ramp to peer in the interior of the generous stall accommodations of the trailer that was as large as many barns. Two young thoroughbreds stamped impatiently. In a corner a dark figure peered at us with huge eyes buried under a massive forelock. Again the driver said, “He sure is well mannered for a stallion.”

That would always be true. 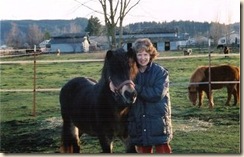 The date was December 16th, 2003. That morning one of our beloved Miniature Horses had passed away. She had been a friend, a talented carriage pony, and she had suffered from Cushing Syndrome. In the early morning Miri gave up the fight for life. That evening Devon’s New Decade, an Exmoor Pony stallion, born in 1980, came to our farm to live with us hopefully to breed our Exmoor mares, and retire on our farm for the remainder of his life. The December day had been an emotional rollercoaster of sorrow and joy. Miri left. Devon arrived.

Steve led Devon to a back-pasture enclosure we had created for him. He pranced, but he proceeded like a gentleman. He called to the other horses, and they trumpeted their return greetings.

Our eyes saw the dark chocolate pony as perfection, but we were not alone in our judgment. When the farrier, Mark Buck, arrived to trim hooves he took a close inspection of Devon. He proclaimed, “You guys won the lottery. When you told me you were being given an Exmoor Pony stallion from someone in Canada, I held my tongue, but I admit I did not think you would get an animal this good. He will improve any mare.”

Perhaps we should have let Devon breed some of our other mares, but we held him back for our two Exmoor females. They would never get pregnant, but not for want of Devon trying. Although he had left progeny across central and eastern North America, he would have no foals on the west coast. Perhaps he was too old when he arrived. Perhaps it was our mares. They were not much younger than he.

Early on, his Canadian owner, Anne Holmes, urged me, “Don’t be afraid to put him with your Exmoor gelding. Devon will get along.

That summer we turned Devon out on a five acre pasture along with the two mares, Flax and Cactus, but also with the gelding Bramble. To our delight, after a brief altercation, the two males began to chum with each other. They would form a bond of friendship that would last.

Devon proved to be the friendliest of the Exmoor Ponies. When we tried to get promotional photos of the ponies running in their pasture, a few arm waves would set Bramble, Cactus and Flax into a mad gallop. Devon nibbled at our sleeves and tried to entice us into a few scratches. He finally obliged us with a canter, but he would return to his human handlers for attention.

Devon loved any treats, but he proved partial to the apple-oat variety. Apples were good, carrots better, but any treat would produce the plaintive stare of a golden retriever. Give Devon a treat, and he would stick like a post-it note.

I had ambitions to get Devon trained. I did not feel confident in teaching him to be a saddle horse, although I think he would have done well. With the help of one of my students, I started to teach him the rudiments of carriage driving. He proved an apt pupil, but I never finished the training. I always thought I had time to get back to working with him.

His affectionate nature went on display in 2004. We took him, along with his buddy Bramble to the Puyallup Fair to be part of the “Animals Around the World” exhibit. He proved to be a ham. He thrived on the attention, and he encouraged Bramble to be on his best behavior. I often sat with my back to Devon, and when he wanted my attention, he would lip on the back of my jacket, sometimes gently grasping the hood in his teeth to bring me closer to him.

In 2005 we returned to the fair for the last time. Bramble refused to load into our trailer in a timely fashion, and we decided to take Devon alone. He seemed to be all right with the solitary five days without a personal equine friend, but when he returned home he burst through the barn, into the Exmoor area, and promptly attacked Bramble like a parent chastising a child who had missed curfew. He clearly said, “Where were you, you nit? You were supposed to go with me!”

Every spring we looked for the mares to widen their girths. They got fat from grass, never from foals.

We loved them all anyway.

Since Friendly Horse Acres is a charitable organization for people who need the company of the horses, I finally allowed Devon to be part of the work. I had a five-year-old girl help me groom him. We spent an hour combing out his luxurious thick black mane and tail, even though nature seemed to take out the tangles leaving him with a heavy, wavy black mass. Alone, Devon comforted an adult in need of his gentle solace. He never shared the secrets she told him. Devon was the most principled of counselors, along with having the virtue of endless compassion. I was told he offered far better emotional healing than the most gifted human therapist.

Then on September 5, 2009, we noticed Devon had a swollen penis. We trailered him to a veterinarian who seemed to have a solution. We thought the stallion had been kicked, or possibly stung. The penis would heal, but on September 24th Devon appeared to have a bout of colic that caused a lot of minor lacerations from thrashing on the ground. All cuts appeared to be curable. That night I noticed Devon had trouble eating the mash that I routinely prepared for him, and his lower lip drooped nervelessly on the left side. The veterinarian returned the next morning, took blood, and listened to Devon’s heart. Then he listened again. And again. He turned to me and said, “Yesterday he had a heart rate of 34. I thought this old horse would live forever. Sixty is in the dangerous zone. Today he has a rate of 112. Steve joined us. The veterinarian took out one more needle. “I am going to warn you, I am doing a tummy tap. There should be no blood in this needle when I pull it out. If there is, it means his system has started to shut down.”

There was blood. A lot.

We made the difficult decision to end Devon’s life before he endured any more pain. Leading the old horse onto the lawn felt like a betrayal. He munched happily, even with his awkward lip. Another poke, he fell, and was gone.

The blood work came back inconclusive, but there were some cancer cells present. I think the horse had a heart condition. Maybe he had a stroke the day before he died. I will never know.

I do know that there are four new chrysanthemum plants in rainbow hues by my back door. Two of my students and their grandmother carefully planted them the afternoon that Devon left us.

When I notified one of his human friends that he had left this world, she asked for photos, and then told me he had been her soul mate. If a soul mate is someone who looks into our soul and forgives us, leaving us feeling better, Devon was a soul mate to all of us who knew him.

I look at Cactus and Flax. Are they swelling? Please, please, let Devon leave one more gift. 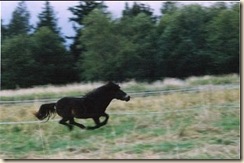 Posted by Laverne Harris at 1:50 PM